There are three types of retinal detachments. The most common form is where a break in the retina’s sensory layer causing fluid to seep underneath. This eventually causes a separation in the layers of the retina. Individuals who are particularly short sighted, with historic eye injuries or who have undergone eye surgery are most susceptible to this type of detachment. This is due to the thinner and more fragile retina in short sighted people. The second most common type is due to increased traction on the retina by strands of scar or vitreous tissue which can ultimately pull the retina loose. 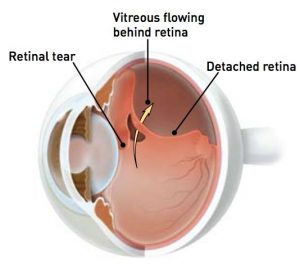 If a hole or tear develops in the retina, then there is an increased risk of there being a full retinal detachment. A detached retina will cause loss of vision, and requires surgical intervention to put the retina back in the right place. Thus, it is very important that you have your eye examined urgently on the onset of any symptoms. There are other less common reasons for floaters – e.g. bleeding into the gel in the back of the eye from a blood vessel (usually in diabetic patients).