Age-related macular degeneration (AMD) is the leading cause of irreversible blindness in people over 50 years of age, affecting an estimated 500,000 people in the UK and 70,000 people in Ireland, with over 12 million sufferers across Europe (BMJ. Mar 1, 2003; 326(7387): 485–488) This eye disease is particularly frustrating because it results in a loss of central vision. In other words, someone with AMD can see everything except what he/she is looking directly at, and is therefore unable to read, watch TV, recognise faces or drive. There is currently an epidemic of AMD, largely because we are all living so long and, some say, our eyes have been exposed to ultraviolet radiation for all those living years.

It is now believed that that damage by free radicals causing oxidative stress within the eye trigger changes that cause AMD to develop. Free radicals are unstable molecules, and are produced in response to a person using oxygen, and in response to blue light entering the eye. Because we use oxygen to live and because we are constantly exposed to blue light, damage caused by free radicals is unavoidable (the cost of living) … but it CAN be minimised.

Who is at risk of developing AMD

The three most important and established risk factors for AMD include:

Other risk factors include:

What can be done to prevent AMD developing?

Some of the above risk factors for AMD are modifiable. In other words, people have control over these risk factors. For example, a person can stop smoking cigarettes, improve their diet and most importantly, increase their macular pigment level. There are two main types of Age-related Macular Degeneration: 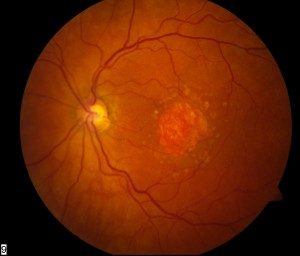 This type progresses at a slower rate but can cause loss of reading vision and central vision over time. In this type, there is no leakage of blood or protein under the retina and is generally the least harmful to vision . There is no specific treatment but recent mounting evidence suggests that cessation of smoking, taking regular high dose antioxidant vitamins and protection from blue light are the actions that are considered most modifiable in order to reduce the risk of progression of the disease to the wet form. 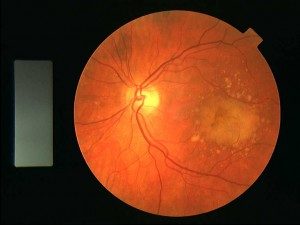 In the wet type of AMD Soft fatty deposits, called drusen, form on the lowest layer of the retina and trigger a response that leads to new blood vessels forming in the area. New blood vessels are usually weak and ‘leaky’ since they are young and the cells that make up their walls have not had time to compress and become tight. This type of macular degeneration is due to the abnormal blood vessels (called choroidal new vessels) growing under the macula (central part of the retina used for reading and central vision). These new vessels have the potential to leak and bleed under the retina, with the capacity to rapidly distort and damage central vision. Blindness rarely results because peripheral vision is usually preserved. Drusen are yellow proteinaceous deposits under the macula and may be a precursor to wet AMD development. They may remain stable for long periods of time. In both these types of macular degeneration the central vision may become damaged but the peripheral vision is usually not affected and so blindness in rarely, if ever, the final outcome.