Glaucoma is the name given to a group of eye diseases that gradually steal sight – usually without warning. In the early stages of the disease, there may be no symptoms. Experts estimate that half of the people affected by glaucoma may not know they have it. Vision loss is caused by damage to the optic nerve. This nerve acts like an electric cable with over a million wires transmitting information that is revived from the retina when it is stimulated by light or direct mechanical action (such as injury or pulling by the gel inside the eye). In short, It is responsible for carrying images from the eye to the brain. There is no cure for glaucoma – yet. However, medication or surgery can slow or prevent further vision loss. The appropriate treatment depends upon the type of glaucoma among other factors. Early detection is vital to stopping or slowing the rate of progress of the disease. It was once thought that high pressure within the eye, also known as IntraOcular Pressure or IOP, was the main cause of this optic nerve damage. Although IOP is clearly a risk factor, we now know that other factors must also be involved because even people with “normal” levels of eye pressure can experience vision loss from glaucoma.

Glaucoma causes progressive damage of the optic nerve at the point where it leaves the eye to carry visual information to the brain. If left untreated, most types of glaucoma progress (without warning nor obvious symptoms to the patient) towards gradually worsening visual damage and may lead to blindness. Once incurred, visual damage is mostly irreversible, and this has led to glaucoma being described as the “silent blinding disease” or the “sneak thief of sight”. Glaucoma is the second most common cause of blindness worldwide. It is estimated that 4.5 million persons globally are blind due to glaucoma and that this number will rise to 11.2 million by 2020. It is noteworthy that due to the silent progression of the disease – at least in its early stages – up to 50% of affected persons in the developed countries are not even aware of having glaucoma. This number may rise to 90% in underdeveloped parts of the world. There are several types of glaucoma. Some may occur as a complication of other visual disorders (the so-called “secondary” glaucomas) but the vast majority is “primary”, i.e. they occur without a known cause. It was once believed that the cause of most or all glaucomas was high pressure within the eye (known as intraocular pressure – sometimes abbreviated as IOP). It is now established however, that even people without an abnormally high IOP may suffer from glaucoma. Intraocular pressure is considered therefore today as a “Risk Factor” for glaucoma, together with other factors such as racial ancestry, family history, high myopia and age. Some forms of glaucoma may occur at birth (“congenital”) or during infancy and childhood (“juvenile”); in most cases however, glaucoma appears after the 4th decade of life, and its frequency increases with age. There is no clearly established difference in glaucoma incidence between men and women. The most common types of adult-onset glaucoma are Primary Open Angle Glaucoma (POAG) – a form most frequently encountered in patients of Caucasian and African ancestry – and Angle-Closure Glaucoma (ACG), which is the more common in patients of Asian ancestry. Angle-Closure Glaucoma is often chronic, like POAG, but can sometimes be acute, in which case it usually presents as a very painful ocular condition leading to rapid vision loss. There is no cure for glaucoma as yet, and vision loss is irreversible. However medication or surgery (traditional or laser) can halt or slow-down any further vision loss. Therefore early detection is essential to limiting visual impairment and preventing the progression towards severe visual handicap or blindness. At Ashleigh Sight Care, our Experts can detect glaucoma in its early stages and advise you on the best course of action. 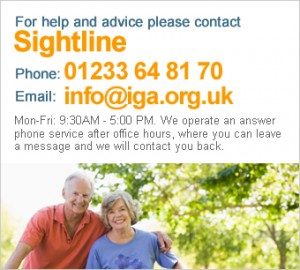